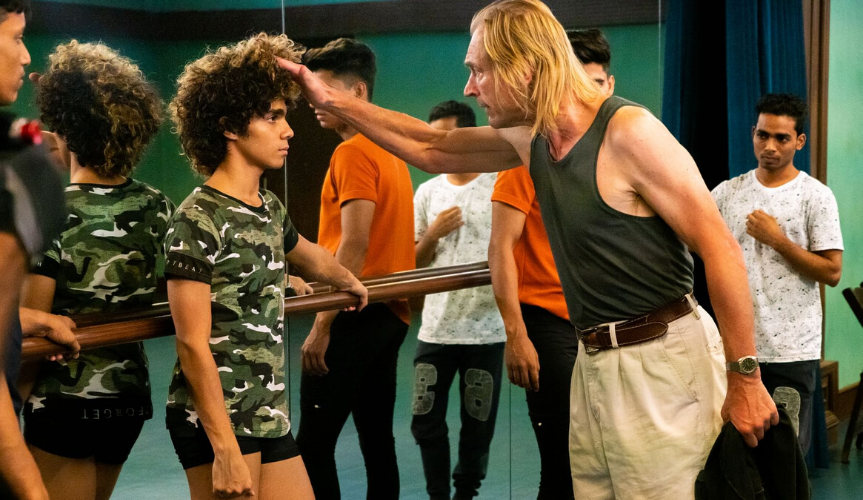 While the world is literally falling apart at the seams, this film is sweet in the purest way imaginable and it made me do a little weep at the end.

Who knows what the Collab’s theme is this month? I suggest it’s just surviving, one film at a time – and with movies like this, we might just make it.

Discovered by an eccentric ballet master, two gifted but underprivileged Mumbai teens face bigotry and disapproval as they pursue their dancing dreams.

Asif (Achintya Bose) and Nishu (Manish Chauhan) are two gifted dancers who have one thing in common – they have nothing. While they share a similar underprivileged background, the similarities pretty much stop there. Asif is a street urchin who runs with a rough round the edges crew, while Nishu is a minor reality star – a fan favourite on a televised dance show.

Asif partakes in (rather dubious) public dance battles by day and moonlights as a thief by night. One day his brother, who works at the Mumbai School of Dance, excitedly reveals that world-renowned dancer Saul Aaron (Julian Sands) is coming to teach there – and is looking for talent to nurture. While Asif joins the class, his attitude stinks and his heart isn’t really in it.

Even so, crotchety old Saul really rates him and recognises his natural talent. Asif’s friends however don’t think he’s anything special and rib him for being a sissy boy. This leads them to row and ends with our boy pulling out last minute from a big job they’ve planned.

Nishu, in contrast, is more wholesome but no more fortunate. He struggles with Saul’s favourite student Asif but is determined to train hard at the old ‘balley’. Befriending classmate Neena, Nishu gets private dance lessons at her home but flees when he overhears her family chastising her for hanging out with someone who may be infected with germs from the ghetto. Charming.

Nishu’s family aren’t the most understanding either and focus most of their time on his sister, who isn’t in the best health. When his father catches her watching a video of his TV performance, one he presumably didn’t know about, he kicks Nish out. He ends up living in the basement of the school in very basic conditions.

While Nish gets to grips with his new living arrangements, Asif learns that the job his friends went on without him went horribly wrong, and one of his pals was killed in the fracas.

This leads him to do some soul-searching and luckily for Saul that means he’s decided to dedicate himself fully to dance. And he’s only a tiny bit distracted by the mysterious dance battle babe he’s recently met…

Well the boys slowly begin to bond and find themselves equally pitched in the eyes of their mentor Saul, who’s determined to make them stars.

But will they overcome the prejudices of their families and their lack of resources to get to the land of opportunity?

I’ll let you find out the rest but it’s a beauty – and the final climactic dance performance is breathtaking.

This is not unlike Billy Elliot in India tbh and that’s a good thing. While our Billy didn’t have religious considerations, he was no stranger to be mocked for his dreams or living on the breadline. That’s a pretty lazy comparison isn’t it?

Sure it’s annoying that it takes a white man to swoop in yet again to save the day. Julian Sands has always been something of an in-joke in our house for his work on the seminal masterpiece Boxing Helena and he’s not the greatest as Saul. He’s downright repugnant actually and although there’s an arc as he learns to respect the boys, I just couldn’t warm to him.

But I’m willing to overlook these things for all the good. Maybe it just got me at exactly the right time, who knows?

What does my life partner think of this one? Would you sweep it of its feet on the dance floor or leave it on the sidelines? Find out here.