This little banger isn’t really my normal type. I’m just not that into real life I guess. However, like probably everybody, I share a morbid fascination for the Victorian-era butcher who callously took the life of five women in the late 1800s.

We all know his name. 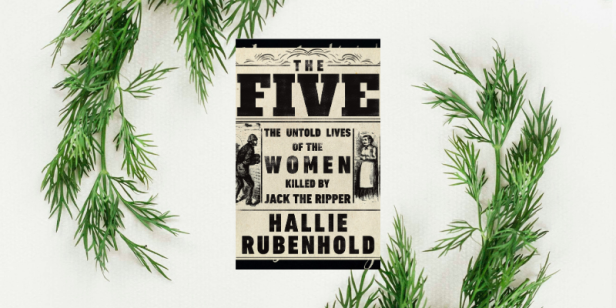 The Five: The Untold Lives of the Women Killed by Jack the Ripper by Hallie Rubenhold

Polly, Annie, Elizabeth, Catherine and Mary-Jane are famous for the same thing, though they never met. They came from Fleet Street, Knightsbridge, Wolverhampton, Sweden and Wales. They wrote ballads, ran coffee houses, lived on country estates, they breathed ink-dust from printing presses and escaped people-traffickers.
What they had in common was the year of their murders: 1888.
Their murderer was never identified, but the name created for him by the press has become far more famous than any of these five women.
Now, in this devastating narrative of five lives, historian Hallie Rubenhold finally sets the record straight, and gives these women back their stories.

Not only does the book work hard to dispel the myth that all the victims were prostitutes, as has always been reported, it also goes in deep on gender politics during this age. While it isn’t a surprise that women had zero in terms of their own rights, some of the laws just seem mental by today’s standard. And the conditions in which all these women found themselves, all the potential that was lost to them when their precarious standings tumbled – I had no idea. Which is outrageous because these women are fascinating and I am so sad to leave them behind.

Historian Rubenhold takes us from birth to the death of each victim – or all but one, who’s early years are unknown – filling in all the blanks in eye-watering detail. While not every movement can be covered, this is rectified by supposing what a typical women in the same scenario may have done/seen/felt. It’s very well done and well written, though the back stories speak for themselves. The women, it’s not a shock to learn were mothers, sisters, lovers, wives, daughters, and they lived and loved, just like the rest of us. They endured more than their fair share of bullshit, usually at the hands of men but also in the eyes of society, which didn’t look favourably on its interpretation of the ‘fallen woman’.

Any woman abandoned by her husband, or widowed early, ran the risk of winding up in the same environment as The Five, which included for all of them at one point: the workhouse, the doss house or the street. Each step precarious and wrought with risk, sometimes with multiple children in tow. Even the ‘the lucky’ ones were destined to live a life of servitude and back-breaking labour with little to show for it, unless they were born into wealth. And even then most of it was dependent on men. Fucking men.

Rubenhold barely touches the crimes themselves, determined to give the limelight to the women for once. The book is respectful and vivid, detailed and horrifying. It’s brought a new aspect to the story, one I’ve heard a thousand times, and a few on guided tours around museums, the names of The Five reverberating around me but never really landing. I’m grateful to know their names and to know something of their lives.

2 thoughts on “The Five: The Untold Lives of the Women Killed by Jack the Ripper”