I can no longer pretend we’re on track with this month’s theme. We’ve gone way off and I’m not even mad – we’ve been having a pretty good time of it too, even if our protagonists haven’t always.

This week’s pick is no different as it sees our timid central character enter the world of karate in order to arm himself against a cruel and toxic world.

After being attacked on the street, a young man enlists at a local dojo, led by a charismatic and mysterious sensei, in an effort to learn how to defend himself from future threats.

Casey: That’s right. I found out your real name is Leslie. I called you that to make you angry. When you think about it, Leslie is a lot more feminine sounding than Casey.

TW: Violence and violence against animals

Casey is a nervy accountant who doesn’t appear to play well with others. To be fair, his colleagues are the worst and since he doesn’t go around talking about burning down their boss’ house or take magazines full of boobs into the workplace, he’s never going to be one of them. One evening on the way home from the store, he’s brutally attacked by a gang on motorcycles. They leave him severely beaten and more frightened of the world than ever.

He considers buying a hand-gun but puts this off when he discovers the local dojo, where he meets Sensei (Alessandro Nivola). Also present at the school is Anna (Poots), a brown belt who has no time for pleasantries, though it is about to become very clear why. Also, why should she? Following his first try out session, Casey is sold on signing up for classes and finally facing his fears.

It’s not long before he earns this yellow belt though this puts more pressure on him. When he fails to break a wooden board during class, he tries to give the belt back to Sensei, who is forced to give him a stern talking to. When asked what his deal is, Casey admits to the mugging and makes it clear he is scared of the world and more specifically, other men. He states that he wishes to become the very thing that terrifies him.

Careful what you wish for, yo.

Sensei, I should have said before, is a strict man with very firm views on what constitutes ‘masculine’. When he first learns Casey’s name he comments on how ‘feminine’ it sounds. He asks him what music he likes, and when Casey replies, tells him he is wrong and that he should only like metal. Warm and fluffy he is not – and he lives by a very specific set of rules – which includes; no shoes on the mat, no food and drink, and guns are for pussies. He also lives in awe of the late great Grand Master, whose framed photo he bends the knee to.

Casey is invited to the much-coveted night class by Sensei who also tells him to stop being so scared – like it’s all just a choice. At work, when he finally returns after two months off, Casey assaults his boss (and friend) Grant by punching him in the throat – finally gaining the approval of his alpha male workmates. At home, he starts learning German (as opposed to the ‘weaker’ language of French) and tells his dog (the most adorable Dachshund) that he will no longer be coddling him. He secretly laments the fact that he isn’t a wolf: a real man’s pet.

At night class – essentially Fight Club – Casey realises that the stakes are much higher when a new pal has his arm broken for defying Sensei. That night he also witnesses Anna – the only female student – beat the living shit out of classmate Thomas (Steve Terada). He assumes this is because she has been overlooked for a black belt over Thomas but she later explains it’s much more than that. Casey meanwhile, is starting to wonder if he’s bitten off more than he can chew. (Yes dear, you definitely have).

When Sensei offers him an accounting role at the club, following his recent unemployment, Casey becomes even more embroiled in his new lifestyle. Sensei calls him one night to tell him he’s found one of the guys who attacked him – and he’s encouraged to exact his revenge. He’s not at all sure they have the right guy but he attacks him anyway, leaving him for dead. Sensei videotapes him during the act, apparently to document his growth.

Casey’s misgivings grow stronger when he returns home to find his dog badly injured (I HATE THIS)*. The emergency vet tells him the little guy fought to the end but was eventually killed by a foot punch to the ribs. Casey confronts Sensei, who denies he had anything to do with it, especially since they were together when it happened.

Well, from here it all goes batshit as Casey is recruited to join the rest of the dojo on a mission to target people walking alone at night. On motorcycles… Hmmm.

How will Casey respond to this twist of fate?

This was a good movie but it was way darker than I expected. Which made it better honestly. It’s a study of the damage the patriarchy does, not only to women but to men too – and I appreciate it.

All the performances were great but particularly from Eisenberg, who I almost always enjoy but don’t really like. I warmed way more to this character than most maybe because I felt his pain. Men scare me too and it’s refreshing to ponder this view from a male perspective.

While this is a very male movie it also examines Anna’s position in such a toxic environment. As the only woman she has been permitted to teach the little kids because all women have maternal instincts, but she will never make black belt. She is better than every one of the class and yet is forced to hold back for fear of emasculating them. At one point, Sensei has her massage Casey and apologises for her having ‘weaker hands’ than a man.

When she explains how she earnt her red stripe to Casey – for taking a life – she tells a horrific story about sexual assault and victim blaming, which will surprise precisely nobody. I must admit I’m also relived that, although the pair form a friendship of sorts, there isn’t a sniff of romance.

This movie is very good at observation. It starts well with a little vignette into Casey’s personality: he’s sitting alone in a diner when two tourists enter and – conversing entirely in French – proceed to slag off their surroundings, the coffee and then Casey. Little do they realise: our protagonist is fluent in the language himself.

It is peppered with small comedic moments that made me smile and at times, feel sad and incredibly mad. Casey is a heartbreaking character who embarks on an intriguing arc that ultimately teaches him that becoming the thing he fears is not really what he wants after all. 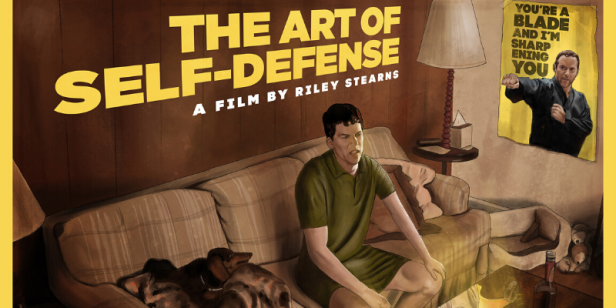 Alternative film poster by The Commas

Does it pass the Bechdel Test?

It’s not on the ‘list’ but it doesn’t pass. This is a very male/masculinity driven flick with only one female character with no other women to talk to.

What does Wifey think of TAOSD? Would she award it a coloured belt or punch it with her foot? Find out here.

*I found this awesome site while writing this review: very useful to have if you’re a horror/thriller/action fan.

5 thoughts on “The Art of Self-Defense”