I’ve seen this a few times around the internet and I thought I’d have a go myself.

Things I’d say to my pre-lockdown self:

This is your future self reporting back from two months ahead (don’t try to work that one out, just trust me). So much and, in turn, so little has happened over that period.

Not all of it is horrendous – but I want to give you some advice to prepare you for entering lock-down. A few little things to make it a bit easier on you, if you like.

You’re about to not see your family and friends for months, so hug them tight and tell them you love them. Go and see your mum now and cuddle the shit out of her. You might consider staying there in the cosiness of her flat in Bexhill, where you can all be together but that’s probably not the best idea. Not being able to walk around naked during lock-down will not be an option. Hug her and make sure she knows how much you’re going to miss her.

Deep clean the flat. You didn’t do that and it’s getting you down now. This isn’t all your slovenly fault, you’ve just made an offer on a house and you’ve half-heartedly starting packing. There’s crap everywhere.

Don’t fight getting the cat. He’s going to bring you untold joy, especially during this time. Try not to get upset when he doesn’t warm to you straight away, he’ll come around.

Please try not to sweat the small stuff. It’s not that small I know, it’s life changing and devastating for so many people but you need to stop disasterising. Put your phone down as much as you can and only read the news once a day, it will drive you mad for a couple of weeks, continually refreshing that newsfeed – and it won’t help.

Buy a truckload of stamps so you don’t have to wait ages for a load to be delivered. You’re going to send a lot of letters and postcards. 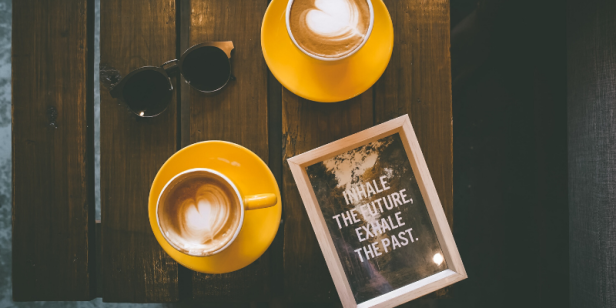 Set up a decent workspace for yourself sooner, by the window where you can watch a quieter world go by. Exercise more. I haven’t done nearly enough because I’ve been too anxious to go outside regularly. Pick a quiet time and power through that shit, because believe me, it gets harder.

Don’t waste your time with the Gilmore Girls/Gossip Girl re-watches, just because you can’t mentally handle anything else. They’ll be there still after lock-down – watch Schitt’s Creek instead. You won’t regret that believe me.

Call the doctor sooner to get your medication back on track. She’s really understanding and it makes a difference, I promise. Make sure you’re always on top of your prescriptions. Wash your face better, you’re having a break-out at the moment which may also be down to lack of vitamin D. Stock up on deep conditioner.

Make sure your loungewear is organised, it’s all you’ll live in.

Did I remind you to hug your friends?

While we still don’t know how this will look in another month, a year – five years time – you’re doing okay. You and Glynn don’t bicker THAT much – and you’re both well trained for staying in. You’ll be alright in your little bubble with the cat, the gerbils and sometimes your step son.

They’ve just permitted us to go outside with one friend at a time so you’ve seen a couple of your besties by now. This has made a massive difference to your mental health.

You’ve been working from home and it’s not so bad – an extra hour in bed is heaven. You shouldn’t stress out about the new role you’re in now. You’re doing fine, honestly.

Things are not fixed and there’s confusion about when they will be but you’re a smart girl, stick with your instinct. Keep doing what you’re doing and you’ll get there, whatever happens.

What advice would you give your pre-lockdown self?

2 thoughts on “What advice would you give your pre-lockdown self?”