Much like I refer to people I follow on Twitter as my good friends, I feel a connection to this author based on my friendship with her brother-in-law. I guess what this means is that her first two novels have felt extra special to me, much like my friend Daisy’s have. It’s so cool to know best-selling novelists (even loosely)!

I might then be a little biased when it comes to sharing my thoughts but I will always be honest. This genre of book – the psychological thriller – is one of my favourites and one I know well, so my judgement is pretty good, I think. I’ve read enough stinkers by now to know what works and what I don’t like. But I liked this one a lot – at least as much as Nicola’s debut, The Girl Before You, which slapped – and I’ve just found out, has been commissioned to adapt for TV…

*No intentional spoilers but tread carefully* 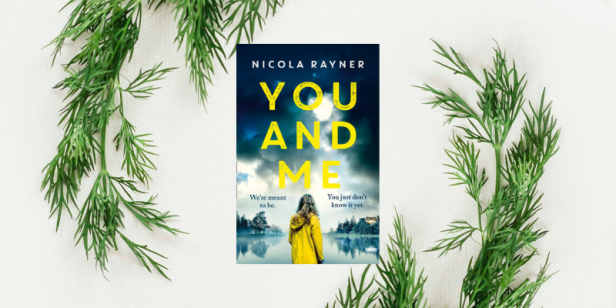 You and Me by Nicola Rayner

A breath-taking suspense full of twists and turns – if you think you know how this ends, think again…

Fran is a woman who by her own admission has never felt the touch of a lover. She works in a book shop, which she adores, has few friends and lives in a flat that she used to share with her mother and sister. In fact, both their bedrooms are still kept exactly as they left them, despite mum having passed away and sister, Ellie off traveling the world with her small daughter, Rose. The sisters are estranged, much to Fran’s consternation but it’s something she wants to fix.

One night, on the platform at South Kensington, Fran catches sight of a couple of boys from her year at school. Unfortunately, tragedy strikes when one of them, Dicky, stumbles in front of the train and is killed instantly. But is Fran imagining the look of shock and possible recognition on Dicky’s face just seconds before he fell – as if he’d seen someone he knew?

As it turns out, our protagonist wasn’t at the platform by chance, having followed Dicky’s pal – and her childhood love – from the bar they were drinking in. She wants to talk to Charles about the incident before she goes to the police, but how to get close to him while he’s mourning Dicky’s death – how does she tell him she was there too?

And… what does she do about the feeling of relief she has now Dicky is dead? The Dicky who made her school years an absolute nightmare AND did something unimaginable to her sister Ellie, changing their lives drastically forever.

All these questions are tackled as the story unfolds and it’s a great story full of intrigue and obsession. Fran is a brilliant character, multi-faceted and sympathetic – and odd – while also having incredible strength. At times she reminded me of Eleanor Oliphant, a character I had the pleasure of meeting this year. Fran has the same way of phrasing things and although she struggles to find her place in the world, ultimately refuses to change for it.

As she wrestles with the dream that she and Charles will one day be together, Fran’s also hellbent on figuring out what Dicky saw before he died. When she builds up a friendship with Dicky’s wife Caroline, the woman start putting the answers together. Can they finally put this mystery to bed?

I read You and Me in one day and I was so satisfied with the ending. It’s written really well and paced fantastically. I enjoyed the characterisation, the throw back to my own school days where I was definitely part-Fran – and I love the twists and turns. It’s a book that keep you prophesying (?) and it comes together in the most bittersweet climax.

I want to say here, without accidentally outing anything, that it delights me that this story flips and becomes not only a mission to find out what happened to Dicky and Fran’s obsession with Charles – but about Ellie too. I didn’t grow up with a sister so can only imagine the bond between them and it seems, in the end, the true love of our heroine’s life isn’t a dude at all.

I definitely recommend this for your next Autumn read!