Who knew that Jill and I could get tired of B-movie horror? Not me but here we are, fatigued by our last three choices and baffled that the one with Billy Zane in it turned out to be the best of the bunch. I, for one, will never get over the image of a white woman birthing hundreds of golliwogs but all in the name of research and um, education, right?

This week’s pick looks like a far superior beast in comparison and it rings in November, hopefully setting the tone for a successful month of reviews. I’ve seen the poster for this all over the internet and I’ve been patiently waiting for it to arrive on streaming for a while. I’m a bit peeved that UK Netflix has released it with little fanfare, actually. I might have missed it had my lovely blog wife not picked it this week.

Find your own voice.

Radha is a down-on-her-luck NY playwright, who is desperate for a breakthrough before 40. Reinventing herself as rapper RadhaMUSPrime, she vacillates between the worlds of Hip Hop and theater in order to find her true voice.

Radha (Blank) is a struggling playwright just about to turn forty. Her knees creak every time she bends down and she isn’t where she hoped she would be by this age, teaching kids in Harlem instead of setting the world alight with her art. Something she was heralded to do almost a decade before, when she appeared on a promising 30 before 30 list. Things aren’t looking up after she assaults a condescending theatre producer (Reed Birney) who wants to work with her but her life long BFF and agent, Archie (Peter Kim) manages to put things right again, if she can just bite her tongue this time around.

She’s reluctant to sell out and to work with Whitman on the play she’s written though, and instead decides to explore rap again, something she’d lived and breathed back in the day. Archie isn’t sure about this turn of events but supports her anyway. Radha goes to see producer D (Benjamin) to lay down some tracks as RadhaMUSPrime but falls asleep while waiting for him and figures she’s missed her opportunity. She’s later presented with a second chance but chastises D and his friends for letting her walk home alone late on the first night. D is a man of few words to begin with but impressed with her talent, quickly warms to Radha.

He invites her to a gig to showcase her work but, in front of Archie and her students, she royally messes it up. Mortified, Radha agrees to the Whitman job but finds it unsatisfying, mainly because her work has been watered down for a mainly white audience. Meanwhile, there’s beef between some of her students which she’s keen to clear up and she keeps dodging her brother’s calls. Having just lost her mother, Radha bonds with new friend D who has also lost his – and his interest in her seems more than just friendly.

How’s all this going to turn out for our heroine? Will she choose the ‘right’ path before she turns 40 – or is it okay just to be finding her voice?

I already know my review isn’t going to do this film experience justice. It’s really enjoyable, beautifully written and shot – and Radha is someone I want to know a lot more about. The B&W film and storytelling style gives me obvious Spike Lee vibes, while the short vignettes with Radha’s neighbours make me think specifically of She’s Gotta Have It, which we reviewed not long ago. I have a lot of time for the old lady who doesn’t mince her words when it comes to our girl’s life choices.

It’s really good to listen to stories told by Black women but also Black women of a certain age. The psychology of turning 40 is no joke and although my experience is light years away from our protagonist’s, is wholly relatable. That whole study of who we’re supposed to be within certain time frames and what the fall-out of not being there can do to a person is fascinating to me, and this is presented perfectly.

The dialogue is incredibly snappy and the RadhaMUSPrime’s lyrics are a joy. I had a moment with D and Radha when they discussed the things they would say to their mothers via an impromptu rap – it’s just beautiful. The relationship between them is actually lovely and it feels real, despite her reservations about the age difference.

I do appreciate that Radha is a large and gorgeous lead character who isn’t defined for a second by her weight or really, her age – at least not by anybody but herself. It’s refreshing to witness a fat character enjoy her sexuality and power without being fetishised or relegated to comedy best friend status. As Jill said in a message, this film is yet another reason we need more films made by Black women because it is really strong, funny and an incredible debut.

Running alongside Radha’s story, we gain insight into Archie’s life, growing up as a gay Korean man – while Radha’s students Elaine (Imani Lewis) and Rosa (Haskiri Velazquez) adapt to their growing feelings for one another.

A plusses all round and a first film that puts triple threat Radha Blank firmly on the Can’t Wait to See What She Does Next list. 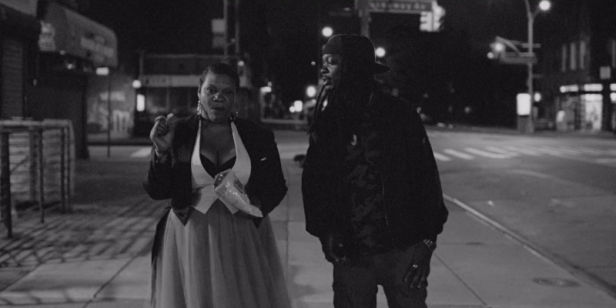 What does my blog wife thing of Radha’s Harlem adventures? Would she stand up and rap her love for it publicly, or freeze on the spot? Find out here of course.

One thought on “The Forty-Year-Old Version”