After we reviewed How to Build a Girl I had an urge to check in with Johanna Morrigan. In this novel, it’s 1995, she’s 19 and living her best life in London, where Britpop is in full swing.

As mentioned, I still have complicated feelings toward CM – and I don’t think she’s as funny or as clever as she thinks she is – however, despite myself I enjoyed this messy but fun follow-up. Way more than I expected to.

I’m Johanna Morrigan, and I live in London in 1995, at the epicentre of Britpop. I might only be nineteen, but I’m wise enough to know that everyone around me is handling fame very, very badly. 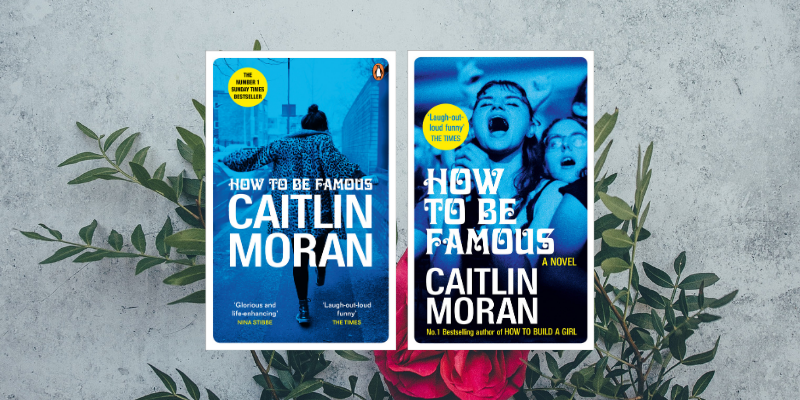 How to be Famous is wish fulfillment at its best and although it’s loosely based on Moran’s own life, Dolly Wilde is all fantasy – made up of all the little things we wish we were. Or at least might of, as teenage girls in the mid-90s. There are points being made here and they’re important ones still absolutely relevant today – about the grey areas in sex, about coercion and consent – about misogyny in the music industry and way beyond that.

I liked these bits and I like the shit-stirryness of it all. Sure they’re exaggerated characters, and ones you don’t always like that much but fuck it. They’re out there doing something and that would have been pretty cool when I was a teen, building my own self.

I even like the romance at the centre of the story. I’m not sure if this is because now I only picture Beanie‘s Johanna/Dolly and that makes the character more sympathetic and likable than she really is. Ditto John Kite as Alfie Allen. This did not hurt my enjoyment of the story one iota, in fact in remembering their chemistry in HTBAG the Movie, I found it quite hot. I actually want to see a second film based purely on this.

The characterisation is somewhat derivative and Suzanne, the new punk BFF just grates. There may be very real reasons for a person to be this irritating and self-involved but I don’t care for her that much. Though it’s hard to critique too hard because through the lens of a teenage girl, which is very much a theme throughout, these are exactly the kind of people I would have been (and was) attracted to when I was 19.

There are couple of sections that actually got under my skin and I think that’s because this took me back. While my upbringing was not the same as Johanna’s by any means – and nor were my experiences – my dreams and wants weren’t that far off, and there were times I found myself in similar sexual scenarios that blurred the lines. That hurts to think about and is maybe a story (or twelve) for another time but needless to say cut deep.

At one point, Johanna talks about her body and I worried about where that would go. Though I give it the benefit of the doubt in some respects because it’s about how she perceives herself, I did think she’d end up on a crusade to shed masses of weight. However, apart from a brief foray into walking and a dip in the Hamstead Heath swimming pond, we don’t hear of it again. Thankfully.

It is funny sometimes but is heavy-handed, it all slots very conveniently into place (hello happy ending) but… maybe it just caught me in the right mood, because I’m fond of it. I liked kicking about Camden with the girls. I like Julia and Zee. I enjoyed it when Pat came to stay. I hated Jerry Sharp and his twisted treatment of women – and I loved some of the (all too relatable) monologues about sex.

CM’s feminism is problematic – and very white – and she bugs me more than I can say, but I’d love to meet Jo and her family again and to see if the feminism has expanded and become more inclusive. That would really please me.

One thought on “How to be Famous”