On Reading IT for the First Time 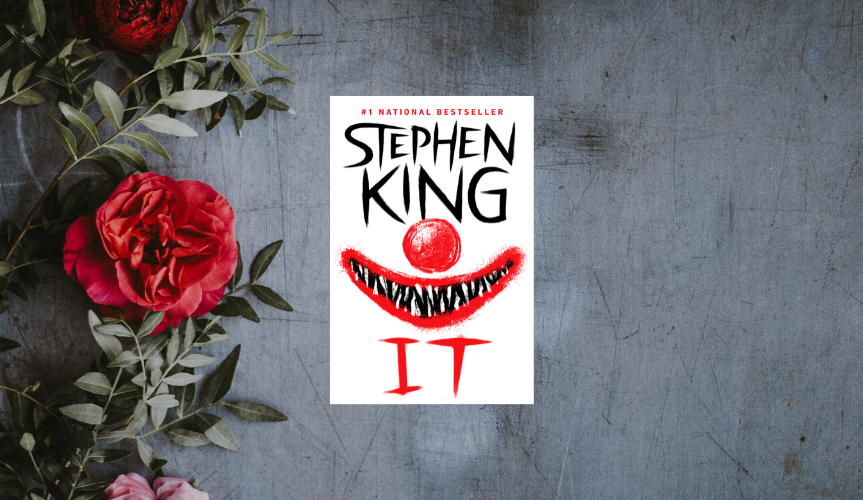 I’m finally reading Stephen King’s IT. Yes, aged 39, I have finally decided to dip my toe in Pennywise the Clown’s rancid world.

Although, it should be said that I no longer have one foot poised precariously over the swamp that is the town of Derry. I am now fully submerged, head and all.

Stephen King’s novels were not part of my childhood. I’m quite sad about that, especially when I hear people I love talking excitedly about his stories and how they built a foundation for their love of horror during their formative years.

I was more of a Jackie Collins’ kind of girl, getting all my sex ed from Hollywood Wives. As I developed a love affair with books, my tastes became much darker and I read a lot of Dean Koontz, Shaun Hutson (Slugs, anyone?) – Stephen King style writers, basically. But not actual Stephen King. Where’s the sense in that?

I watched a lot of his films though (including 80’s IT) and maybe there’s a clue there. Maybe watching was easier for me, so I didn’t feel the need to pick up the paperbacks. I’ve corrected that in adulthood but I’ve still only read a handful. It was running joke in our house for years that Glynn would always ask me, “Have you read Pet Cemetary/Thinner/Dark Tower?” and I’d be all, “You know I’ve only read Needful Things.” Now I’ve added Rose Madder, The Shining, Doctor Sleep and almost IT to the list.

(So far I think IT is the most powerful, though I loved The Shining too. Oooweee!)

Back to this story though. IT is the tale of a maniacal clown sure, one who can manifest himself into anything horrifying that frightens a person (there’s even a shark in the novel, who swims serenely up the river past a terrified secondary character). It’s about a rotten to the core town where things turn evil and twisted, every 25 years or so.

But at its heart it is also about friendship, grief, letting your freak flag fly, overcoming fear and bullies – about getting out of an awful situation and then going back because you made a pact when you were twelve.

It’s about hope for a better day, one without evil. Man, sound familiar?

This is not a review. I haven’t finished the book yet, and I dread the day I do. I’m 800 pages in and there are nearly 1400. It’s a wild, detailed terror ride, for real. Like, who knew your own imagination could be churned into such a frenzy by a few words?

I’m beside myself for the new film adaptation and Pennywise but more importantly, I can’t wait to meet the kids. I’m getting major Stranger Things vibes from the trailers, not least because of Finn Wolfcastle’s involvement. And that can only be a very good thing.

I can’t wait to hang out with Ben, Stanley, Mike, Big Bill, Richie, Beverley and Eddie again, and I haven’t even left them yet.

So, please excuse me while I go back to my book and my new friends. Damn I wish I’d known them when I was a kid.