This man needs little introduction honestly – but he does have his own (Academy Award winning) theme tune to do the job for him so, if you feel the need, maybe Google it?

I can’t honestly argue with the lyrics. He’s a very sexy man indeed, though perhaps not very finessed in the art of rescue. More on that in a little bit.

This week is focused on – but of course – the man himself, and the good news is, if we enjoy ourselves, there are several sequels just ripe for the picking.

Shaft in Africa, anyone? 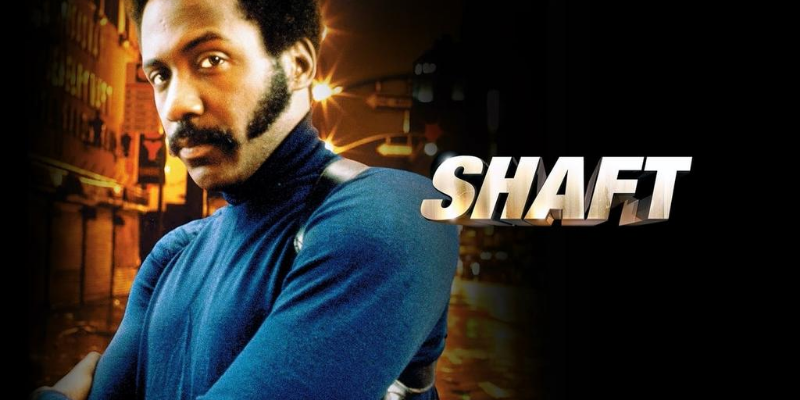 Cool black private eye John Shaft is hired by a crime lord to find and retrieve his kidnapped daughter.

John Shaft (Roundtree) has just the right mix of skills and swagger to live up to a name like that, which is lucky ‘cos everyone seems to want a piece of him – namely a couple of gangsters, who are very interested in speaking with him. When they finally catch up to him, Shaft ends up throwing one of them out of a window during the ensuing tussle – which, funnily enough, finds him in hot water with the police department. The very same police department he helps out in the role of sexy P.I.

Luckily, he has a relationship of sorts with Lt. Vic Androzzi (Cioffi) who – after some fantastic banter with Shaft – allows him back onto the street for 48 hours, pending a deeper think about what to do with him following window-gate. Now aware that the two gangsters had been tasked with bringing him to their boss, the fantastically named Bumpy Jonas (Moses Gunn), Shaft acquiesces to a meeting with the Harlem kingpin.

Ellie Moore: You got problems, baby?
John Shaft: Heh. Yeah, I got a couple of ’em. I was born black… and I was born poor.

The thing is, Bumpy claims not to know anything about Marcy’s kidnappers so it’s up to Shaft to use his superior investigative skills to work out what’s what and get her out of there. Meanwhile, there’s a war brewing in Harlem between Bumpy & co – and the Mafia. Vic is concerned that the Mafia, who have already murdered a couple of cats, will start a war that will annihilate the community and everyone in it. And, since the war would essentially be perceived as black against white – AKA. a race war – he’s keen to stop it at any cost.

Vic is after information about Shaft’s gangster friends and shares intel on a couple of Mafia leads – the same men who appear to be watching Shaft from the bar across the street. Our man has figured they’re the ones holding Marcy – so has a plan to get them arrested so he can pump them for information later.

Alas, extracting Marcy from her captors the first time round proves a little trickier than anticipated, and Shaft is shot in the hub bub (actually, the shoulder). After being fixed up by his underground doctor, he realises he’s gonna need to a bigger boat – and negotiates a sweet deal for his associate, Black power activist Ben Buford (Christopher St. John) and his crew with Bumpy. Oh, and a sweet twenty gees for himself, if he pulls it all off.

With his new army behind him, will Shaft finally execute a successful rescue mission? Well, what the hell do you think? All this and he still has time for a little bump n’ grind (with at least three different women). And who can blame him, huh – hero shit is tiring work.

I don’t recall ever seeing this movie before, though I know I’ve seen the 2000 remake, directed by John Singleton, no less.

I was into the original which zips along with a decent amount of action, a divine soundtrack and a shit tonne of zinging dialogue. John Shaft gets all the best lines which is only fair but he really bounces off Vic Androzzi, his unofficial work colleague and, dare I say it, friend.

There are some interesting observations throughout; e.g. Shaft’s ‘joke’ about being black and poor, his inability to pick up a cab which emphasise a lot of the challenges faced by African Americans during this time (and no doubt right now). Unsurprisingly, the film examines themes of masculinity, sexuality and the black power movement.

What’s particularly interesting to me is that this film was originally written for a white lead but the casting of Roundtree changed the film’s racial connotations significantly and is credited for moving things forward for black filmmakers in Hollywood. So whatever you think about it, it’s an important film (you can read more here).

I will say the women in this are nothing more than victims or bits of fluff, though one of Shaft’s lovers, Dina (?) is impressive. I’d like to have seen better characterisation of the ladies in Shaft’s life. His white piece is just plain annoying and her “close the door yourself, shitty” retort, on being kicked out of Shaft’s apartment becomes a particularly unfunny catchphrase.

On closing, I would just like to say that Shaft is not a subtle man and I get it, that’s just part of his schtick but my god man, are you looking to get yourself killed? He bumbles about like a bull in a china shop and barely gets Martha or his gang out alive. Sloppy work, I would say even if he does get the job done eventually. Just.

Does my blog wife dig it or would she start a war against it with help from the Italians? Find out here, you know the drill.